My name is Mark Gutman. I am a staff photographer for The Daily News in Batavia, New York. I have been a staff photographer there since 1999. I am a graduate from The University of Buffalo in 1997 with a degree Photography. I am a member of the National Press Photographers Association NPPA and a member of the Associated Press. I have won several Journalism awards as a member of the those organizations. In 2006 I was awarded the New York State Associated Presses, Bernard Kolenberg Memorial Award, for the best photo in New York State. The Award is given annually to a member for excellence in Newspaper photography. 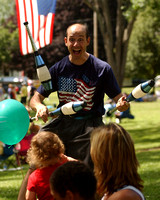